As a healer working in the Akashic Records, I’m intimately connected with how we create our lives through choice.  I see how cause and effect play out as we make a choice and have a corresponding consequence that mirrors the energetic quality of that choice. I work with individuals to heal soul level issues that have been with them for lifetimes as they continue to replay old patterns and ways of being that are deeply ingrained.

I love my work and assisting others in their transformational process as they profoundly shift into alignment with their authentic self.  There is no better feeling than being a witness to this shift.

My conundrum as I step into advanced Consciousness studies is bridging the gap between the states that most of us reside in polarity, cause and effect, choice and consequence which are mutable Universal Laws of lower Consciousness (meaning they can be transcended) and higher levels of Consciousness where these laws do not exist (where Karma ceases to affect someone).  I’ve mulled over these concepts for some time, fundamentally understanding that in upper levels of consciousness ‘everything just is’.  I understand theoretically, as it states in the Bhagavad-Gita, “God is Above the Opposites”.  But I’ve always felt like a piece of that puzzle was missing for me in connecting a world with clear examples of cause and effect with a world where choice and consequence don’t exist…until yesterday.

Yesterday I attended an Angel Circle in Alpharetta, Georgia.  I was invited by a lovely woman I met at a networking event that I’ve enjoyed getting to know better.  Always up for a new adventure, my most recent experiences have included connecting with the angelic realm (I also attended an Angel Initiation retreat at the end of April).  In the Akashic Records, I connect with a client’s spirit guide team but I know very little about the world of angels, archangels and ascended masters. I certainly believe in their support and light all around us but I don’t typically ask for their guidance or work with them like I do with guides. (If you knew how many parking spaces they’ve located for me, it would astonish you!)

Part of the circle yesterday was a meditation to breathe in Harmony and to breathe out Synchronicity.  I love Synchronicity and was happy to call that in.  I stated my intention for the day was to find like minded individuals who were also interested in expanding their awareness and the Angel card I energetically drew was… friendship! The facilitator of the circle commented on the fact that my angels are Overt when communicating with me.  I agreed because I’ve found my guides are, so surely the angels communicate in a similar fashion.  I asked the angels to assist me on my path in all areas and to allow synchronicity to flow through my life. I connected with many great women and left the circle feeling light in body and spirit.

On the way home I passed a giant billboard that drew my attention as I focused on it for some time.  The Billboard displayed one word with large lettering… GRACE.  I was struck by the word and completely fascinated with it as I continued to stare while thinking about the one Angel I definitely knew to have, my daughter Aiden Grace Lafferty, born on June 24, 2002 who left this world 2 short weeks later.  I sent her love and warm thoughts as I continued on my drive.

The afternoon and evening flew by with the typical Sunday unfolding of laundry, cleaning and connecting with family.  While starting to wind down before bed, I decided to open an email from Derek Rydall, a spiritual teacher I follow and enjoy learning from.  And there it was in his latest newsletter, the answer that had eluded me, the piece of the puzzle that connected the lower seals of consciousness with the upper and the synchronistic message of the billboard!

World religions, when interpreted from a more literal perspective, sometimes teach that we’re at the whim of an external God who rewards or punishes us for good and bad deeds, like Santa’s naughty or nice list—or just acts in capricious, mysterious ways that we’re not intended to understand.

But a more spiritual or mystical interpretation of the Christian teaching “as you sow so shall you reap,” the Buddhist teaching of karma, or the metaphysical law of attraction suggests that there is no external power; it is the seeds we sow in our own heart and mind—the overall quality of our consciousness—that cause us to reap the rewards and punishment we experience.

While this is a liberating truth and a great step up the evolutionary ladder, it can also be an overwhelming realization. If all the things we’ve thought, said, and done in the past (or past lifetimes) are creating our present and, ultimately, our future, won’t it take the rest of our lives (or many more lifetimes) to undo the mess we’ve created? A lot of causes (karma) have been set in motion—how will we ever reverse all their effects?

Mercifully, there is a higher law: Grace. The law of Grace says that no matter what has come before, no matter what you’ve set in motion, when you reconnect with the Truth of your being – this Perfect Seed Pattern the world has never touched and can never destroy – the innate wholeness, wisdom, and power you need will emerge again. From this consciousness, your past does not determine your future—neither past mistakes nor past lives.

The bad seeds you’ve sown are uprooted no matter how deep they’ve dug in, and the good seeds you’ve failed to tend take root and bear fruit. Under the law of Grace, the things you’re struggling with lose their power; cause and effect, karma, even Newtonian physics, which once operated as absolute, immutable laws and masters of your fate, become the servants of your destiny.

The #1 expert on the Law of Emergence, Derek Rydall is part of a new generation of spiritual visionaries and revolutionary thought leaders. He has trained top executives at Fortune 500 companies in communications and empowered leadership (from American Express to Disney), coached Oscar and Emmy winning celebrities and media professionals on creating conscious entertainment, is a professional screenwriter, best-selling author and a regular contributor to The Huffington Post. Through two decades of speaking, teaching, coaching and writing, Derek has built a global platform that touches hundreds of thousands of people around the planet with his message on finding your path, living your purpose and making a powerful impact in the world! 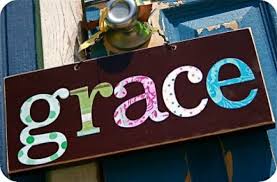 Wow!  Ask and you shall receive.  It all came together.  Ironically, I had even added ‘Ease and Grace’ on a shopping list my fiancé was making that afternoon because I noticed a level of stress had permeated his day. The missing link between the lowers seals of consciousness and the upper seals were in that one beautiful word.

In closing, Grace IS our pathway to expanded healing and  wholeness. May you practice it in your life as you navigate each and every day while connecting to your truth within.

The Akashic Records are an energetic database that contain an imprint of every thought, feeling, action and experience for every soul that has ever lived. Practitioners can access the Records for guidance and insight into past, present and future possibilities. Accessing our record gives us considerable information.

Together we can shift your paradigm to empowerment so you can create an energetic alignment with love, joy and abundance instead of struggle, fear and lack.

Sessions are done via Skype or phone worldwide. In person business and coaching sessions are available in the metro Atlanta area.

How to Stay Sane in an Insane World

About Your Sacred Truth

Your Sacred Truth is connecting to the knowing that you are a magnificent being with unlimited potential and unlocking the capacity inherent within you. I invite you to take the journey of exploration and up level your awareness with a commitment to Discovery of Self.

"Having my Soul Profile and Realignment session with Rebecca completely changed the direction of my personal life, my career life and has deepened my relationship with Spirit."
Tamalla MalletLearning You Education, LLC

" I am truly, truly grateful to you and all the gifts and insights you have given me and I look forward to working with you in the future."
Debbie Coffin

"The impact Rebecca has had on me cannot be summarized here on paper. I can say with conviction is she embodies Sacred Truth. She is a precious and rare gift and if you are blessed enough to work with her you will find she resonates this in her sessions, her heart and her soul."
Diane Ram

Enter your information below to download the E-Book ‘The Path to Purpose’.

Connecting with our purpose can feel daunting and elusive.  Yet we know when we do, we will have so much more clarity and direction in our life. This E-book walks you through the process for discovering your purpose so you can feel fully alive, deeply connected and create a life that truly matters.

Enter your information below to download the E-Book 'The Path to Purpose'.

Thank you! Please check your email to confirm subscription!